Every one of our instructors has a long history in the martial arts and possesses detailed knowledge of our extensive traditional curricula. Rank is not easy to come by, and only a handful of Shihan Crosswell's black belts have ever been awarded the distinguished title of sensei. Subject to these exacting standards and armed with over 170 years of combined experience, our elite instructor team is able to provide every Arizona Budokan student with careful, nuanced instruction suited to each individual. 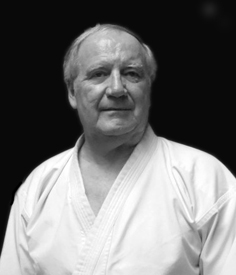 Shihan Rudy Crosswell is internationally acclaimed as one of the most accomplished and versatile martial artists in the world today. A second-generation student of the founder of Shito-ryu and a lifelong practitioner of Okinawan kobudo and Japanese sword, he has trained consistently with dozens of legendary masters for over half a century. With 10th dan rankings in both Shito-ryu karate and Okinawan kobudo, he is unique among living martial artists for his level of technical expertise, depth of practical application, and nuanced historical understanding of his chosen arts. As Chief Instructor, he holds every one of his assistant instructors to the same set of exacting standards, ensuring that the priceless martial arts knowledge he has accumulated over his lifetime is passed down to the next generation intact.