A Brief History of Okinawan Kobudō:

Each of our arts has a rich history backed by an intact lineage of lifetime instructor-student relationships. Shihan Crosswell has amassed a stunning collection of weapons forms from a distinguished lineup of authentic kobudo masters.

An ancient practice shrouded in mystery 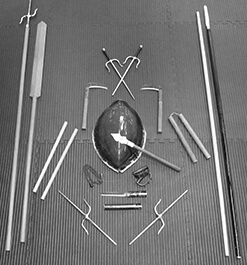 The history of kobudo is as long and multifaceted as humankind’s use of weapons itself. Though weapons techniques and loosely organized systems of weapons study predate empty-handed martial arts, it is more accurate to consider karate and kobudo as interrelated aspects of a single approach to defense and combat. The core of today’s Okinawan weaponry can be traced back to a handful of masters from the late 1700s whose knowledge is said to have come from extensive study in China—knowledge that was then preserved through either family or village tradition or through Okinawan groups designed to preserve the region’s rich kobujutsu heritage.

Okinawan kobudo expanded and flourished over a period of two hundred years thanks to the efforts of these dedicated practitioners; however, by Kenwa Mabuni’s time the ancient weapons systems seemed to be on the decline. Conventional weapons were no longer prohibited in Okinawa; the Japanese rejected kobudo as a historically insubstantial and disorganized product of a culturally backward farming population; and unlike empty-handed arts, it was not popularized and propagated through the public school system. 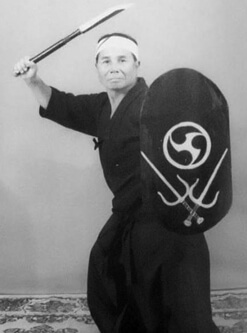 In an era when traditional weapons arts were rapidly fading from view, Shinken Taira (1898–1970), was one of the few martial arts masters who dedicated his life to amassing as much kobudo knowledge as he could from a wide variety of sources. One of those sources was Kenwa Mabuni, who had collected a formidable amount of kobudo knowledge while travelling throughout the Okinawan islands in his work with the police force.

Shihan Crosswell (full biography) recieved the core of his weapons training via Shogo Kuniba and Teruo Hayashi, both of whom were dedicated students of Shinken Taira.

Honoring and preserving a priceless art 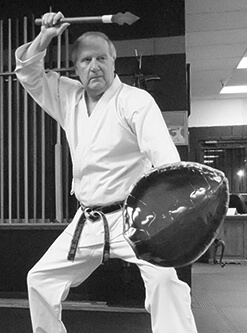 In addition to the extensive bo, sai, tonfa, nunchaku, and kama knowledge he received from Shogo Kuniba and Teruo Hayashi, Shihan Crosswell worked closely with renowned kobudo historian and practitioner John Sells for over a decade amassing a broad collection of older and more rare weapons forms. During this time and in the decades that followed, he got direct source information on Shinken Taira’s kobudo from Don Shapland and Hidemi Tomoyose as well as information on lesser-known village-style kata from instructors like Roy Hobbs and Terry Stanton, who studied directly under the Okinawan masters as well. Other notable instructors who shared their kobudo knowledge with Shihan Crosswell include George Alexander, Fumio Demura, Kotaro Iha, Masahiro Nakamoto, and Lee Gray.

The kobudo syllabus taught at the Arizona Budokan today contains a staggering amount of priceless historical information collected from an eclectic array of sources both celebrated and obscure.With detailed instruction in over a dozen weapons and more than fifty kata, students are given access to the deepest and most authentic aspects of the Okinawan weapons tradition. Ancient kobudo knowledge is preserved and taught in a way that honors the unique characteristics of each weapon while seamlessly integrating their root similarities and effectively translating their application for practical use in the modern age.